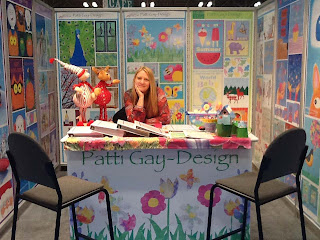 I think everyone's experience at the Surtex show is individual. Having read and talked to so many others that have already exhibited was a big help as far as expectations go. I have always been there through an agent in the past so this was the first time I exhibited on my own. I had so much fun and was really happy with how everything went. I ended up doing paper banners and was really pleased with them.They were easy to hang and the printer did a fabulous job. I was nervous about having them shipped directly to the hotel and didn't see them until setup. It all worked out. Phew!  I'd made a little dummy of the booth before hand to determine where all the panels were going to go and the design. I used both notebooks and an i-pad for my portfolio.  That worked well for me. I think some clients liked the notebooks better, so it was good having both.Casey Spencer a talented designer helped me in my booth. She was such a great help in many ways including set up and pull down. We also had a lot of fun! 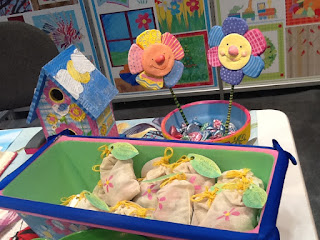 The show had some quiet moments, but the booth in general was pretty busy.
I did a lot of prep work before the show reaching out to companies that I'd worked with in the past or that were familiar with me to make appointments. I loved connecting directly with the people at companies. It's so nice to put faces with people I've known on the phone or internet for years. I had been told that Tuesday is usually really dead, but I found it as busy for me as the previous days. 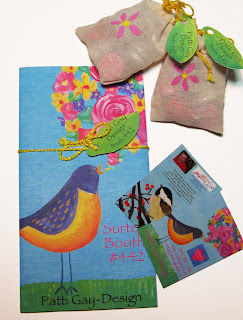 Another great thing was getting to meet so many other artists. I had the nicest neighbors to my booth and several artists stopped by to say hello. Great to meet so many of you! I also got to meet several at a get together one of the companies I work with did at an Irish pub Monday evening. I'll be doing interviews with several of them on The Illustrator's Market blog in the near future. 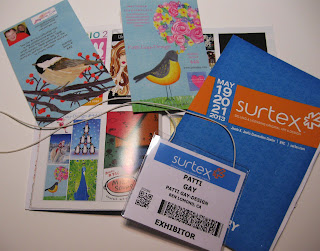 The most exciting part was the positive reception of the Two Can Art collection that I do with my son, Noah. For those that don't know, Noah is autistic and paints beautiful textures that I then use to create images. This collection is really special to me.
Overall, I had a really exciting and fun time at the show. I am now doing follow up. There are some promising leads that look really good.

I have everything on my checklist completed to exhibit at the Surtex Show in New York. Heading out this coming Friday. The show starts on the 19th and goes through the 21st. My wall panels are getting shipped to my hotel my bags are already full of everything I am carting there. My appointments are made. I will be posting about my experiences here and on the Illustrator's Market blog. It will be really fun to meet so many other artists that are attending the show. A mix of business and fun. 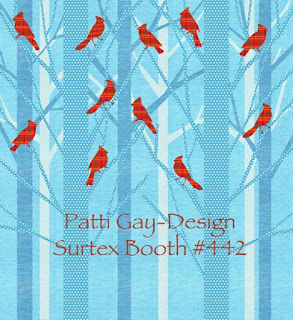